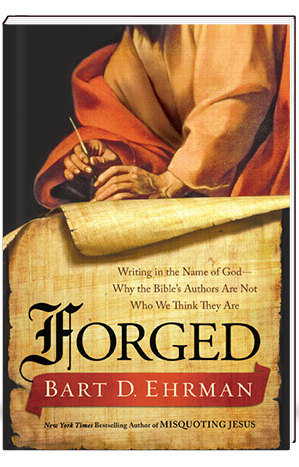 “Ehrman provides evidence here that the ancient world, in fact, generally condemned forgeries as much as the modern world does. He then goes on to discuss works that were wrongly claimed to have been written by Peter or by Paul as well as other forgeries, including some in the last two centuries. He distinguishes between the use of a pen name to hide the writer’s identity and a forgery that claims to be the work of someone else. Most of the forgeries Ehrman discusses served Christian anti-Jewish propaganda, although some were antipagan, while the so-called Gospel of Nicodemus was an attempt to correct the very anti-Christian Acts of Pilate. Ehrman uses other forgeries as well to support his conclusion that “Christians intent on establishing what was right to believe did so by telling lies.”

VERDICT Ehrman reveals for ordinary readers what most mainstream biblical scholars accept, but he then attributes motives to the writers, which are more speculative, ending his book with a discussion of a few justifiable lies or forgeries and those not justified (all the rest). Recommended for sophisticated readers who will come to their own conclusions about Ehrman’s opinions. —Carolyn M. Craft, emerita, Longwood Univ., Farmville, VA

“We may never know what drove these people . . .to hide their own identity and to claim, deceitfully, that they were someone else. Their readers, had they known, would probably have called them liars and condemned what they did. But in their own eyes, their conscience may have been free from blame, and their motives may have been as pure as the driven snow. They had a truth to convey, and they were happy to lie in order to proclaim it.”—from Forged

It is often said, even by critical scholars who should know better, that “writing in the name of another” was widely accepted in antiquity. But New York Times bestselling author Bart D. Ehrman dares to call it what it was: literary forgery, a practice that was as scandalous then as it is today. In Forged, Ehrman’s fresh and original research takes readers back to the ancient world, where forgeries were used as weapons by unknown authors to fend off attacks to their faith and establish their church. So, if many of the books in the Bible were not in fact written by Jesus’s inner circle—but by writers living decades later, with differing agendas in rival communities—what does that do to the authority of Scripture?

Ehrman’s fascinating story of fraud and deceit is essential reading for anyone interested in the truth about the Bible and the dubious origins of Christianity’s sacred texts.