From a Human Prophet to the Son of God 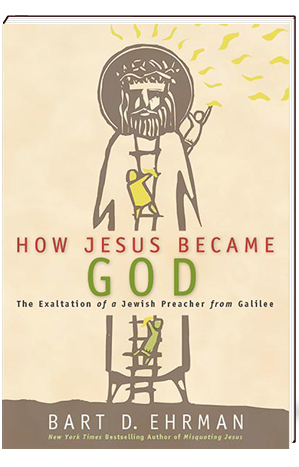 How Jesus Became God:
The Exaltation of a Jewish Preacher from Galilee

“How Jesus Became God makes the most astonishing and complex topic in the history of Christianity accessible to every reader, and offers a clear and balanced discussion of how various Christians—and non-Christians—see Jesus.”
—ELAINE PAGELS, professor of religion at Princeton University and author of The Gnostic Gospels

“Ehrman has done it again! In this lively and provocative book, he gives a nuanced and wide-ranging discussion of early Christian Christology and all that it entails. Tracing the developing understanding of Jesus from a fully human apocalyptic preacher to a fully divine being, Ehrman shows his skills as an interpreter of both biblical and nonbiblical texts. This is an important, accessible work by a scholar of the first rank.”
—MICHAEL COOGAN, Harvard Divinity School lecturer and editor of The New Oxford Annotated Bible

“Ehrman writes with vigor and clarity, but above all with intellectual honesty. He demystifies a subject on which biblical scholars too often equivocate. Both believers and nonbelievers can learn much from this book.”
—JOHN J. COLLINS, Holmes Professor of Old Testament at Yale

“How did ancient monotheism allow the One God to have a ‘son’? Ehrman tells this story, introducing the reader to a Jewish world thick with angels, cosmic powers, and numberless semidivinities—among whom, for this tiny messianic sect, Jesus of Nazareth, raised from the dead. How Jesus Became God provides a lively overview of Nicea’s prequel.”
—PAULA FREDRIKSEN, author of Jesus of Nazareth, King of the Jews

In a book that took eight years to research and write, leading Bible scholar Bart D. Ehrman explores how an apocalyptic prophet from the backwaters of rural Galilee crucified for crimes against the state came to be thought of as equal with the one God Almighty Creator of all things.

Ehrman sketches Jesus’s transformation from a human prophet to the Son of God exalted to divine status at his resurrection. Only when some of Jesus’s followers had visions of him after his death—alive again—did anyone come to think that he, the prophet from Galilee, had become God. And what they meant by that was not at all what people mean today.

As a historian—not a believer—Ehrman answers the questions: How did this transformation of Jesus occur? How did he move from being a Jewish prophet to being God? The dramatic shifts throughout history reveal not only why Jesus’s followers began to claim he was God, but also how they came to understand this claim in so many different ways.

Written for secular historians of religion and believers alike, How Jesus Became God will engage anyone interested in the historical developments that led to the affirmation at the heart of Christianity: Jesus was, and is, God.