Fourth Gospel in the Writings of Origen 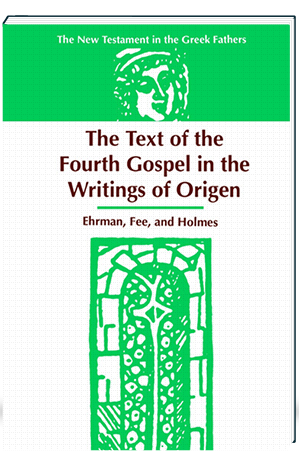 The Text of the Fourth Gospel in the Writings of Origen

This is the first of a two-volume study of the quotations of the Fourth Gospel in the writings of Origen, the greatest scholar of Christian antiquity. In this work, Ehrman, Fee, and Holmes present all of Origen’s quotations in full, including all significant allusions, and provide a detailed comparison of these references with a range of important Greek and Latin Gospel manuscripts. In the forthcoming second volume, these data will be analyzed to show what they can tell us concerning the history of the transmission of the New Testament text in Origen’s two principal places of residence, Alexandria and Caesarea. This study will prove invaluable for anyone who is concerned to see how the text of the New Testament came to be modified during the course of its transmission as well as for all who are interested in the interpretation of the Gospel by the most significant exegete of the ante-Nicene age.

“We have in Ehrman et al. an unrivalled presentation of [all the citations of Origen from John’s Gospel in all his extant writings] together with a representative selection of textual variants from selected MSS. of the Greek (and Old Latin) New Testament where appropriate… To be able to reassemble and evaluate the type(s) of text of John available in the third century to a scholar as alert to textual variation as Origen will be of enormous benefit to text critical studies as well as to patristics. With the wealth of carefully assembled and judiciously arranged raw materials in this volume we anticipate that the second half will provide satisfying answers to questions about Origen’s text(s) in particular but also about text-types in general…[W]e congratulate the three scholars responsible for part one for their painstaking and valuable monograph which maintains the already high standards set in this series.” — J. Keith Elliott, Novum Testamentum