Christianity's Rise & How It Shaped World 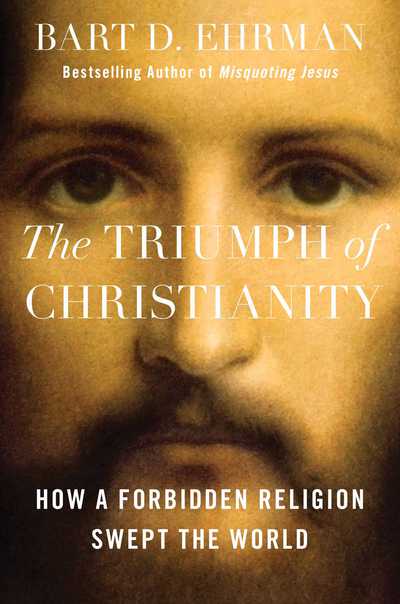 The Triumph of Christianity – How a Forbidden Religion Swept the World

“How did a small, provincial Jewish sect called Christianity convert the mighty pagan Roman Empire? Bart Ehrman answers this baffling question with the same wit, passion, and rigorous scholarship that have made him one of the most popular religion writers in the world today. The Triumph of Christianity is a marvelous book.”
– Reza Aslan, New York Times bestselling author of Zealot

“In his latest popular exploration of Christianity, noted New Testament authority Ehrman (Religious Studies/Univ. of North Carolina; Jesus Before the Gospels, 2016, etc.) asks, “how does a religion gain thirty million adherents in three hundred years?” In attempting to find an answer, he consults other scholars while looking at data, extant literature, and varied historical facts to explain the explosion of Christianity under the latter Roman Empire. The author begins in the usual place, with the life of Emperor Constantine, who converted to the Christian faith in 312 and changed the landscape of religious life in Europe from then on. In doing so, Ehrman makes the important point that it is difficult for historians to say what Constantine converted from. Indeed, having swept across the Western world, Christianity erased much of the pagan culture it replaced, leaving current scholars with little evidence of what once existed or even how Christianity made its swift advance. The author points out that conversion in the early years of the faith was not done “by public preaching or door-to-door canvassing of strangers” but instead by “everyday social networks [and] word of mouth.” With the notable exception of the biblical Paul, “the most significant Christian convert of all time,” few other traveling evangelists are identified in early Christianity. Converts were instead made by personal contact with other believers, yet at a rapid pace. Ehrman notes a number of characteristics that made Christianity attractive to Roman pagans—e.g., the emphasis on the church as family, care for the less fortunate, and promise of an afterlife—and once the emperor himself had joined, the door was opened to phenomenal growth. The author concludes with a look at post-Constantinian roadblocks to Christianity and the church’s own early forays into intolerance and violence.”
—Kirkus Review

From the New York Times bestselling authority on early Christianity, the story of how Christianity grew from a religion of twenty or so peasants in rural Galilee to the dominant religion in the West in less than four hundred years.

Christianity didn’t have to become the dominant religion in the West. It easily could have remained a sect of Judaism fated to have the historical importance of the Sadducees or the Essenes. In The Triumph of Christianity, Bart Ehrman, a master explainer of Christian history, texts, and traditions, shows how a religion whose first believers were twenty or so illiterate day laborers in a remote part of the empire became the official religion of Rome, converting some thirty million people in just four centuries. The Triumph of Christianity combines deep knowledge and meticulous research in an eye-opening, immensely readable narrative that upends the way we think about the single most important cultural transformation our world has ever seen—one that revolutionized art, music, literature, philosophy, ethics, economics, and law.